Gastric balloon is a medical device that is used in an endoscopic intragastrical procedure, where the inflated silicone balloon is inserted in the stomach and is retained there for 6–12 months. This is widely known as weight loss balloon that is designed to help individuals to eat less and feel full sooner while eating. This makes less room for food and helps the body to adapt to healthy portions. This procedure is non-surgical, non-invasive, and requires no-incision. However, this procedure is not permanent and helps individual to lose up to three times the weight when compared to diet alone. Apart from weight loss it has many health benefits as it helps in improving diabetes, maintains cardiac health, and improves other bone-related issues.

Endoscopic bariatric therapies (EBT) have shown greater results and less adverse events. The delivery of EBT requires special room facility and preparation that will accommodate the size, weight, and surgical gowns for the patient.

The FDA approved products, such as Orbera intragastric balloon, the AspireAssist, and ReShape Integrated Dual Balloon have high signifiance in the market.

Intragastric balloon offers non-surgical and less invasive endoscopic procedure with reversible weight measurement that has grown in a scale with stronger impact on the market. Therefore, as more EBT are available for obese patients it will become more feasible and effective to offer long-term treatment in the future.

The market is dominated by Apollo Endosurgery, Spatz FGIA, ReShape Medical, and Obalon Therapeutics, which has more than 90% market share in the Global Intragastric Balloon market. Factors, such as the increased prevalence of obesity, growing popularity about minimally non-invasive techniques, and the introduction of swallowable pills, are expected to boost the market growth.

The Global Intragastric Balloon Market is estimated to witness a CAGR of 9.6% during the forecast period 2017–2023. The market is analyzed based on three segments, namely product type, end-users, and regions.

The regions covered in the report are North America, Europe, Asia Pacific, and Rest of the World (RoW). The Americas is set to be the leading region for the intragastric balloon market growth followed by Europe. Asia Pacific and RoW are set to be the emerging regions. The emerging markets have a high potential to grow owing to an increase in the number of obese population and its related chronic disorders. Further, the government is focusing toward improvising healthcare infrastructure and creating awareness among people for early prevention of diseases. Medical tourism is the new trend in emerging markets as most of the people from developed countries are traveling to APAC, especially India, for bariatric procedures. However, the high cost of intragastric balloons and expensive procedural costs, lack of skilled surgeons, lack of proper reimbursement policies, lack of awareness about gastric balloons in developed and developing countries have significant impact on the overall market growth.

The global intragastric balloon market has immense growth opportunities for vendors in both developed and developing regions. The market in the developed countries is seeing an increase in the adoption of gastric balloons, especially in the US, Canada, France, Germany, and the UK and few of the Middle East Countries. These countries have the highest obese population accounting to 70% to 75% of the total obese population worldwide. Major vendors are directly competing with primary bariatric invasive surgical companies for replacing surgeries such as sleeve gastrectomy, gastric bypass, and various laparoscopy surgeries. Most of the companies, including tier II companies also focus on building a strong relationship with the customers and physicians to have direct sales and product revenue generation. The growing awareness about the products and rise in number of physician-owned implant distributions that have resulted in the rise in volume of intragastric balloon procedures have led individuals undergo treatment for obesity.

The report provides complete details about the usage and adoption rate of intragastric balloons for the treatment of obesity. Therefore, the key stakeholders can know about the major trends, drivers, investments, vertical player’s initiatives, and government initiatives toward the intragastric balloon adoption in the upcoming years. They can also get details of the pureplay companies entering the market. Moreover, the report provides details about the major challenges that are going to impact on the market growth. Additionally, the report gives complete details about the key business opportunities to key stakeholders in order to expand their business and capture the revenue in specific verticals, and to analyze before investing or expanding the business in this market. 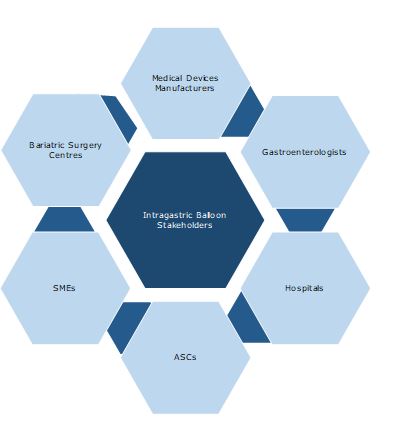 5.2.3.2    Alternative techniques for treatment of obesity