Sleep apnea is a condition in which a person stops breathing for few seconds at night either due to airway blockage or because signal from the brain is not received. In severe conditions, a person stops breathing for more than 10 times in an hour. The American Journal of Epidemiology stated that in 2013, around 26% of the adults aged 30–70 years had some form of sleep apnea, whereby 16% of them had mild sleep apnea and 10% had severe sleep apnea.

Among the various forms of sleep apnea, obstructive sleep apnea (OSA) is the most common type. According to the WHO around 100 million people worldwide have OSA. In the US, OSA is said to affect 1 in 4 men and 1 in 9 women, which totals to 23 million working adults. Center for Disease Control and Prevention has also found that the annual healthcare cost for OSA in the US is $165 billion, which is higher than asthma and obesity. Sleep apnea is resulting in reduced productivity at work and increase in road accidents. The National Highway Traffic Safety Administration has estimated that around 100,000 car accidents, 40,000 injuries, and 1,550 deaths per year are caused due to driver’s fatigue.

The Global Sleep Apnea Devices Market is growing due to factors such as the rising usage of oral appliances, growing awareness of ill effects of untreated sleep apnea in developed countries, technological advances in diagnostics and therapeutic devices, and the increasing number of lifestyle diseases such as diabetes and obesity. However, alternative treatment for sleep apnea, lack of patient compliance, and stringent regulatory approval are some of the factors hampering the market. The market in India, Brazil, and China are also expected to grow at an accelerated pace during the forecast period.

Geographically, North America dominated the Global Sleep Apnea Devices Market followed by Europe. These two regions collectively occupy more than 60% of the total market. This was due to the availability of technologically advanced sleep laboratories and the increasing awareness of sleep apnea in these regions. Moreover, high obesity rate and good reimbursement facilities are accelerating the growth of the market. Asia Pacific and RoW are expected to have the highest growth rates during the forecast period. In addition, low awareness of the condition and lack of advanced technology products challenge the Global Sleep Apnea Devices Market growth.

The diagnosis of sleep apnea is carried out by polysomnography (PSG), home sleep titration, and CPAP titration. The major share of the Global Sleep Apnea Devices Market is occupied by PSG diagnosis, which occupies more than half of the total market. However, the actigraphy devices are the fastest growing devices due to their high sensitivity during the sleep study process.

Post diagnosis, based on the severity, the patient is suggested to use therapeutic devices such as positive airway pressure (PAP) devices or oral appliances. The use of PAP device is the first-line therapy provided, and it occupies nearly half of the market. But nasal obstruction and discomfort of the CPAP masks, and nose and mouth dryness are some of the unmet needs of sleep apnea. Oral appliances are used to address the unmet need of the CPAP devices.

Among the end-users, a large portion of the market is occupied by hospitals and homecare. Technological advancements in the devices are giving rise to user-friendly and compact products. These factors are making the market for home sleep study products to grow at a high rate.

Currently, the CPAP devices and consumables are dominating the Global Sleep Apnea Devices market, but a lot of new players are focusing on developing next-generation diagnostic and therapeutic devices to gain future business opportunities. The market is dominated by ResMed, Fisher & Paykel, and Philips Healthcare. Small companies are investing greatly in developing technologically advanced products to gain their market share. In July 2017, Respicardia Inc., raised around $5.1 million for a pivotal trial of its implantable, pacemaker-like device for the treatment of sleep apnea. 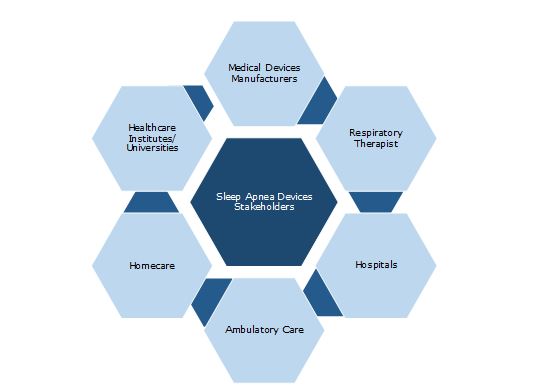