Radiation oncology is a medical specialty that uses high energy radiation such as gamma rays, X-rays, protons, or electrons for cancer treatment. These high energy ionizing radiation damage nucleic acids, either directly or indirectly, through the formation of reactive oxygen species and free radicals. Radiation treatment can be used in combination with chemotherapy, surgery, and immunotherapy. According to the estimation of National Cancer Institute, in the US, around 1.6 million new cases of cancer are diagnosed, and 595,690 people have died due to cancer in 2016. According to the study of World Health Organization, approximately 14 million new cancer cases were diagnosed and is expected to increase by about 70% over the next 2 decades. Increasing cancer cases and increasing adoption of non-invasive procedures in emerging countries are expected to fuel the growth of the radiation oncology market in the near future.

The radiation oncology market is booming due to increasing incidences of cancer globally, increasing elderly population, and technological advancements. The high cost of instrument and therapy, side effects, and lack of trained technicians in developing countries are few of the factors hampering the market growth. The markets in emerging countries are expected to grow rapidly during the forecast period due to increasing healthcare spending, growing patient pool, and increasing healthcare awareness among the public.

Market Analysis: The “Global Radiation Oncology” market is estimated to witness a CAGR of 6.7% during the forecast period 2018–2024. The market is analyzed based on four segments – therapy type, application, end-users, and regions.

Application Analysis: The market, by application, is segmented into prostate cancer, cervical cancer, breast cancer, lung cancer, head & neck cancer, brain cancer, and others. Prostate cancer occupies the largest market share and is expected to be the fastest growing segment during the forecast period.

End-users Analysis: The market, by end-users, is segmented into hospitals, radiation therapy centers, ambulatory service centers, and others. Hospitals occupied a significant share of the radiation oncology market in 2016, and this trend is expected to continue for the next 5 years.

Competitive Analysis: Currently, external beam radiation therapy dominates the global radiation oncology market. The existing leading players and other predominant market players are concentrating on this market to offer advanced and innovative products with fewer side effects. The key market players are acquiring small companies to enhance their product portfolio and strengthen their leadership position in the market. Apart from this, major players are launching new radiation therapy products to have the edge in the market. For instance, in May 2017, Varian Medical Systems introduced the Halcyon system, an entirely new device for cancer treatment. In September 2017, Qfix launched new radiotherapy positioning technology for the accurate treatment of breast cancer.

Benefits: The report provides complete details about the usage and adoption rate of radiation oncology products in various applications and regions. With that, key stakeholders can know about the major trends, drivers, investments, vertical player’s initiatives, government initiatives toward the product adoption in the upcoming years along with the details of commercial products available in the market. Moreover, the report provides details about the major challenges that are going to impact on the market growth. Additionally, the report gives the complete details about the key business opportunities to key stakeholders to expand their business and capture the revenue in the specific verticals to analyze before investing or expanding the business in this market. 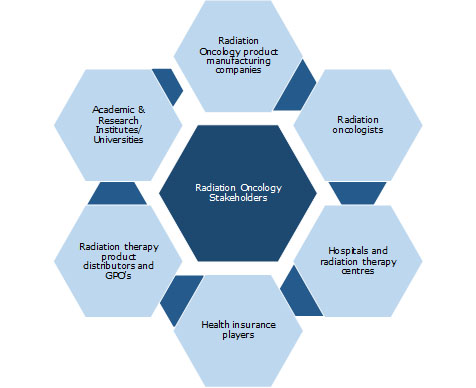 6.3.2.2   Applicators, afterloaders and other accessories