Heart valves are essential for proper flow of the blood in the right direction. If the heart valves do not work properly, blood disruption occurs causing a condition called stenosis. This condition restricts the amount of blood that can flow and lead to various heart conditions such as coronary artery disease, congenital heart defects, degenerative valve disease, rheumatic fever, and bacterial endocarditis (infections).

The market is growing at a faster pace and is expected to proliferate in the emerging countries. Factors such as increasing lifestyle diseases, smoking population, growing aging population, favorable reimbursement, and technological advancements in products are driving the growth of the market. However, lack of awareness about the disease, stringent regulatory approval procedures, and risk associated with the procedure are hampering the growth of the market.

Market Analysis: The global prosthetic valves market is estimated to witness a CAGR of 13.7% during the forecast period 2018–2024. The market is analyzed based on three segments, namely product type, end-users, and regions.

Regional Analysis: The regions covered in the report are North America, Europe, Asia Pacific, and Rest of the World (ROW). North America is set to be the leading region for the prosthetic valves market growth followed by Europe. Asia Pacific and ROW are set to be the emerging regions. The emerging markets have a high potential to grow due to increase in the patient population and focus on healthcare infrastructure. The market has the lowest penetration in the emerging regions, and most of the vendors are targeting to penetrate in countries such as India, China, Thailand, Vietnam, etc. However, the risk associated with the prosthetic valve, stringent regulations for approval, lack of skilled surgeons, and paucity lack of awareness about advanced diagnostic tools in the developing countries have a significant impact on the overall market growth.

Product Analysis: The transcatheter heart valve market is growing faster and dominates the global prosthetic valve market with more than 62% of the share. The increasing aging population, the rise in the prevalence of CVD, and growing adoption of transcatheter aortic valve replacement procedures (TAVR) are driving the market growth. Multi-modality cardiac imaging tools such as MRI, CT scan, and ultrasound are highly adopted to diagnose various valvular diseases. The advancements in heart valve technologies, i.e., 100% sutureless solution aortic valve replacement by LivaNova (Sorin Group), have revolutionized the valvular replacement procedures. Further, the use of biodegradable and synthetic polymeric scaffolds for exogenous stimulation of tissue growth with extracellular matrix has created tremendous opportunities for tissue engineering.

Competitive Analysis: The global prosthetic valves market is highly fragmented and has immense growth opportunities for vendors, especially in the developing regions. The market has the presence of many global, regional, and local players with intense competition among themselves to acquire the largest share. Abbott Laboratories, Boston Scientific Corp., Edwards Lifesciences, and Medtronic acquire small players to increase their market share. The vendors have a strong focus on acquiring smaller companies and expanding their business operations by leveraging their products portfolio across the globe. The competitive environment in the market will intensify further with an increase in product/service extensions, product innovations, and M&A. They form strategic alliances for the marketing or manufacturing of prosthetic valve devices.

Benefits: The report provides complete details about the usage and adoption rate of prosthetic valves for the treatment of various valvular-related disorders. Thus, the key stakeholders can know about the major trends, drivers, investments, vertical player’s initiatives, and government initiatives in the upcoming years along with details of the pureplay companies entering the market. Moreover, the report provides details about the major challenges that are going to impact the market growth. Additionally, the report gives complete details about the key business opportunities to key stakeholders to expand their business and capture the revenue in specific verticals, and to analyze before investing or expanding the business in this market. 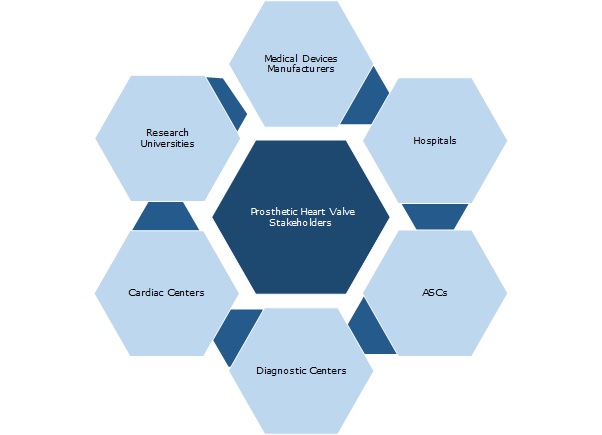 10  Companies to watch for