Neurointerventional is a complex medical specialty concerned with individuals suffering from neuro-related diseases and disorders. The nervous system is prone to several diseases that affect the brain, spine, peripheral nerves, and spinal cord. Symptoms, such as muscle weakness, seizures, perception, partial or complete analysis, cognition or emotional state, loss of bowel, and bladder control, are due to various neurological problems. Neurosurgery is the most advanced and modernized method for diagnosis and treatment, which includes computed tomography, magnetic resonance imaging (MRI), computer-assisted imaging, stereotactic radiosurgery, and

magnetoencephalography. Some of the common neurosurgeries include craniotomy, microsurgery, oncological neurosurgery, neuroendoscopy (endoscopic endonasal surgery), and stereotactic neurosurgery. There is a wide availability of neurointerventional devices, such as flow diverters, embolic coils, aneurysm clips, neurovascular stents, aspiration devices, and support devices, that are used in performing neurosurgeries.

Cerebral disorders are among the most common neurological disorder and are prevalent in women. Changing lifestyles and stress have resulted in the development of a range of disorders like mood disorder and anxiety. Some of the most prevalent neurological disorders are stroke, multiple sclerosis, epilepsy, brain injuries, Alzheimer’s disease, and Parkinson disease, and neuro-infections. Neurological disorders cause more than 10% of the deaths worldwide. According to estimates by WHO, more than 350 million people are suffering from depression globally. According to the Brain Aneurysm Foundation, there are about 50 million brain aneurysm-related deaths every year, out of which half of the deaths occur in individuals who are aged below 50 years.

Factors, such as increased prevalence of neurological disorders, increasing awareness about new technologies, presence of large pool of patients in emerging markets, and advent of new innovative neurosurgical devices, such as flow diversion devices, neuroendovascular stents, liquid embolic, clot retrieval, and balloon catheters, are expected to drive the market growth during the forecast period. The market is expected to witness substantial growth due to the emergence of the neurointerventional technology that has eventually propelled innovation related to neurosurgical devices with the involvement of minimally invasive technique. The Neurointerventional Devices Market  in India, Brazil, and China are expected to grow at a rapid pace during the forecast period mainly due to the presence of patients affected with various neurosurgical disorders.

Neurointerventional devices continue to demonstrate substantial improvements in patient outcomes by delivering high-quality and life-sustaining treatments. This factor provides huge potential for the market growth in both developed and developing countries with a wide range of opportunities. Vendors are investing hugely in R&D for the development of new products to gain the major market share globally.

The Global Neurointerventional Devices Market is segmented based on aneurysm devices, cerebral angiography and stenting devices, neurothrombectomy devices, and support devices. Aneurysm devices dominate the market and are the most innovative and fastest growing products in the Global Neurointerventional Devices Market. This segment is expected to grow at a CAGR 12.9% during the forecast period. The neuroendovascular treatment is widely accepted in most of the developed countries and have a strong hold of aneurysm devices like flow diverters, embolic coils, aneurysm clips, and platinum coils that are used in diverting and neuroendovascular coil treatment (aneurysm embolization/coiling). In 2015, about 44,500 neurovascular coiling procedures were performed in the US, 28,000 in Western Europe, and 5,500 in Germany. Therefore, the opportunities for growth in the emerging countries of LATAM and APAC remain vast. The increasing adoption of MI surgeries in treating neurological disorders, particularly in the elderly and the growing availability of devices contribute to the growth of the market.

The regions covered in the report are North America, Europe, Asia Pacific (APAC), and ROW. The Global Neurointerventional Devices Market  is highly fragmented due to the presence of many vendors in the market. The innovations in the area of neurointervention have introduced products in the market from both leading and new entrants in the market. The vendors are focusing on the expansion of new applications to offer novel devices, which find use in increasing number of cerebral disorders. The key vendors focus on expanding their business by M&A, partnerships, and by attending conference and trade shows. North America is set to be the leading region for the growth of the neurointerventional devices market followed by Europe. There has been a significant increase in the number of individuals undergoing treatment for various neurosurgical procedures in the US. For instance, according to the American Academy of Neurology, neurological disorders accounted for 7% of all the global diseases in 2014.

Europe accounted for the second largest market with chronic pain being one of the major complications with the rising cerebral disorder cases. In 2015, the public spending on healthcare in Europe amounted to 18% of the overall government expenditure. The expenditure on chronic pain care with neurostimulation devices is directly reimbursed to hospitals within the NHS. Clinical evidence of neurosurgical devices when compared to other treatment, such as drug therapy, is expected to increase during the forecast period. Every year, approximately three million individuals sustain stenosis (25% of these require hospitalization), one million have stroke, and more than one million people are diagnosed with brain tumors in this region. In the Middle East and Sub-Saharan Africa, the mortality rate due to stroke is expected to triple in the next few years and is expected to lead to increased hospitalization and permanent disabilities.

The Neurosurgical Devices Market revenue in APAC is expected to reach $1,320 million by 2023, growing at a CAGR of 16.80% during the forecast period 2017–2023. Factors, such as high prevalence of neurological diseases, the presence of a large pool of patients, increase in disposable income, and rise in awareness about treatment for complex neurosurgeries, drive substantial market growth. The increase in government spending in healthcare, infrastructure, research centers, and the establishment of manufacturing facilities by major vendors are influencing the high growth of the market.

Currently, the Global Neurointerventional Devices Market is dominated by aneurysm devices which have the maximum number of procedures and sales of flow diverters in the market. Vendors are focusing on investing a huge amount in R&D to develop new innovative products with newer applications to offer novel devices. Most of the vendors in the Global Neurointerventional Devices Market are focused on expanding their business through M&A, partnerships, and trade shows. Big players, such as DePuy Synthes, Inc., Terumo Corp, Medtronic PLC, and Stryker Corp., along with the collaboration with other universities and neurological research centers for clinical trials of neurology diseases are coming up with new neurosurgical devices in the market. Significant investments in R&D and the increasing awareness about complex neurosurgical procedures in the Global Neurointerventional Devices Market are expected to boost the market growth.

The report provides complete details about the usage and adoption rate of neurosurgical devices for various neurological diseases and different regions. Thus, the key stakeholders can know about the major trends, drivers, investments, vertical player’s initiatives, and government initiatives toward the adoption of neurosurgical devices in the upcoming years along with the details of commercial neurosurgical devices available in the market. Moreover, the report provides details about the major challenges that impact the market growth. Additionally, the report gives complete details about the key business opportunities to key stakeholders to expand their business and capture revenue in specific verticals and to analyze before investing or expanding the business in this market. 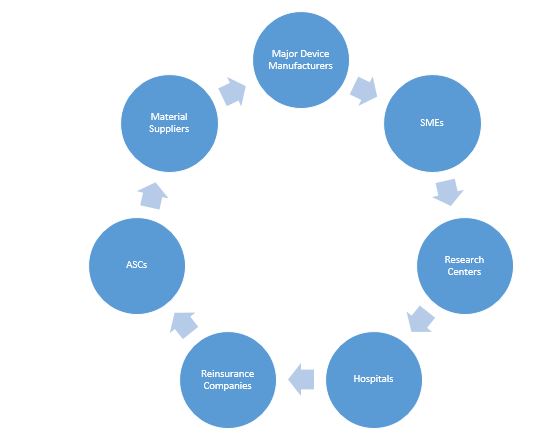 5.2.1.1    Increase in prevalence of neurological disorders