Ablation refers to the surgical removal of a body tissue in the form of transferring heat to the target tissue. The process is used to remove a tiny or large quantity of tissue. There are many types of ablations and have multiple techniques, which are used to perform the removal of tissue, depending on the type of tissue.

A specially equipped needle is inserted near the site with image-guided modalities such as computed tomography (CT), ultrasonography, and magnetic resonance imaging (MRI). The needle is subjected to various form of electrical tests depending on the type of technology used. The techniques such as radiofrequency with radio waves, cryoablation by liquid nitrogen, and laser ablation by laser beam have proven to be beneficial for individuals who have critical medical conditions such as cardiac arrhythmias, prostate tissue, corneal surface laser ablation, tumors, and chronic pain. Based on the type, the products are classified into different categories such as radiofrequency, ultrasound, electrical, cryoablation, hydrothermal ablation, microwave ablation, and laser.

The rise in awareness about minimally invasive surgeries or procedures has created high adoption as it is less painful, performed as an outpatient procedure, and unlike traditional open surgeries, they require less cost. Minimally invasive surgeries are emerging as potential replacements for conventional therapeutic cancer surgeries for the treatment of various tumors of prostate gland, lungs, and liver. Further, robotic navigation technologies that perform ablation procedures more accurately are being incorporated to increase the popularity of these surgeries. The cost of tissue ablation treatment is directly proportional to the size of the tissue/tumor and the number of probes required for the surgery..

The “Global Ablation Devices Market” is estimated to witness a CAGR of 10.61% during the forecast period 2017–2023. The market is analyzed based on three segments – product type, end-users, and regions.

The market is dominated by Medtronic, St. Jude Medical (now Abbott Laboratories), Boston Scientific, Johnson & Johnson, and AngioDynamics which has more than 75% market share in the Global Ablation Devices market. The market is highly fragmented with the presence of many global and local players. The factors such as increased prevalence of chronic disorders, growing popularity about minimally invasive surgeries, focus on early prevention, and increase in disposable income are driving the market growth.

The regions covered in the report are North America, Europe, Asia Pacific, and Rest of the World (ROW). The Americas is set to be the leading region for the ablation devices market growth followed by Europe. Asia Pacific and ROW are set to be the emerging regions. Brazil is set to be the most attractive destination, and in Latin America, the popularity and the usage of ablation procedures are expected to increase in the coming years.

Consumables are the fastest growing segment and dominates the global ablation market with 47% of the total market. Cardiac arrhythmias are the most popular ablation treatment followed by cancer ablation methods in all ablation types. Increase in the prevalence of chronic disorders and growing number of ablation procedures are expected to drive the consumable market during the forecast period. The ablation catheters segment is growing at a steady rate and stands second in the global ablation market. The generator/electrosurgical unit segment is growing at a moderate growth rate and is expected to see a significant growth in the emerging markets.

The Global Ablation Devices market is highly fragmented and has immense growth opportunities for vendors, especially in the developed regions. The presence of large, small, and local vendors in the market possess high competition. The vendors have a strong focus on acquiring smaller companies and expanding their business operations by leveraging their products portfolio across the globe. The competitive environment in the market will intensify further with an increase in product/service extensions, product innovations, and M&As. They form strategic alliances for the marketing or manufacturing of ablation devices products.

The report provides complete details about the usage and adoption rate of ablation devices for the treatment of various chronic disorders. With that, key stakeholders can know about the major trends, drivers, investments, vertical player’s initiatives, government initiatives towards the ablation devices adoption in the upcoming years along with the details of pureplay companies entering the market. Moreover, the report provides details about the major challenges that are going to impact on the market growth. Additionally, the report gives complete detail on the key business opportunities to key stakeholders to expand their business and capture the revenue in the specific verticals to analyze before investing or expanding the business in this market. 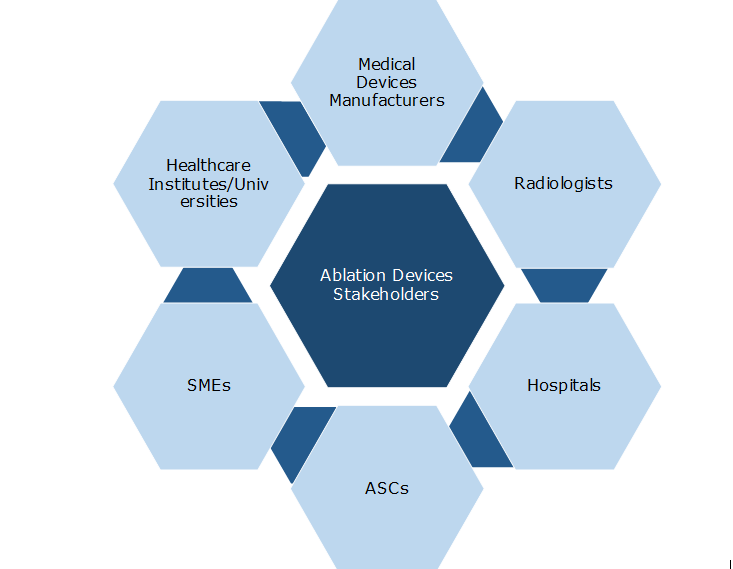 4.4.1.3    Increase in the number of outpatient procedures

4.4.2.4    Shift towards minimal and non-invasive procedures

12   Companies to Watch For