Infoholic’s market research report predicts that the global drug eluting stents market will grow at a CAGR of 5.4% during the forecast period 2018–2024. The major drivers of the market are the increasing prevalence of cardiovascular diseases, rising aging population, growing acceptance for minimally invasive endovascular surgeries, and good reimbursement facilities are few of the factors driving the growth of the drug eluting stents market. Increasing healthcare spending, rise in the number of outpatient procedures, and market expansion opportunities in emerging nations are providing an opportunity for the growth of the market. However, alternatives for drug-eluting stents, lack of skilled healthcare professionals, and stringent regulatory approval process are hampering the growth of the market.

New product development, geographical expansion, collaboration, mergers & acquisitions, and pricing strategies are vital undertakings of players in the drug eluting stents market. For instance, in May 2018, MicroPort, a Chinese company acquired the cardiac rhythm management segment of LivaNova, which has made MicroPort a prominent player in the market. In January 2017, St. Jude Medical, one of the major players in the market, was acquired by Abbott Laboratories for a total of $25 billion. In August 2018, Boston Scientific Corp. signed an agreement to acquire Veniti Inc. Recently, the prices of coronary stents in India have been slashed by around 70%, making it affordable to lower-income people. As a result, Abbott Laboratories and Boston Scientific are withdrawing their most advanced products “Absorb” and “Synergy & Promous Premier”, respectively. This has helped MicroPort to establish its market easily in India with the targeted drug eluting stents. The technology of MicroPort is proved to be no less than Abbott and other products by market leaders. This is expected to strengthen its market in India.

Some of the Drug Eluting Stents Market key vendors:

Approximately 90% of all percutaneous interventional surgeries use a coronary stent of all stenting procedures is done with drug eluting stents. Therefore, the majority of the market is occupied by coronary arterial intervention.


The advantages such as availability of surgery specialists, reduced hospital stay duration, and less charge of surgery have made ambulatory surgical centers the most preferred mode for the treatment. This has made them the largest segment among end-users during the forecast period.

The report provides detailed information about the usage and adoption of drug eluting stents devices in various applications and regions. With that, key stakeholders can find out the major trends, drivers, investments, and vertical player’s initiatives toward the product adoption in the upcoming years, along with the details of commercial products available in the market. Moreover, the report provides details about the major challenges that are going to have an impact on market growth. Additionally, the report gives complete details about the business opportunities to key stakeholders to expand their business and capture the revenue in the specific verticals. The report will help companies interested or established in this market to analyze the various aspects of this domain before investing or expanding their business in the drug eluting stents market. 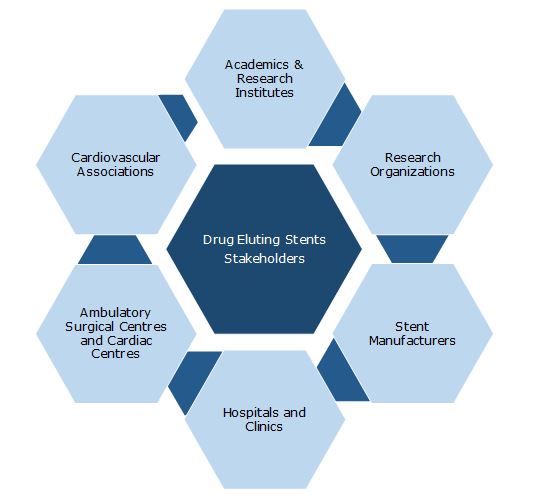 3.4.1.1 Trends in the cardiovascular drugs market

3.4.2.1 Trends in the Aortic Aneurysm Market

5.1.2.2 Increase in the number of outpatient procedures

5.1.3.1 Stringent regulations for the approval process

12  Companies to Watch for