Brachytherapy is a medical procedure popularly referred to as radiation therapy. It is used to treat various types of cancers which involves placing radioactive materials inside the body, which is called internal radiation. Surgeons deliver high dose of radiation to the target site. There are fewer side effects and complications involved in this procedure than surgery and external beam radiation. Brachytherapy is administered with high precision, in high doses, and is localized. Brachytherapy procedure is as follows:

A thin catheter is placed at the target site or in the tumor and is connected to a high-dose rate (HDR) afterload. The system consists of a single highly radioactive indium pellet at the tip of the wire. The pellet is pushed into the catheter one by one (performed under computer control). This is called dwell time. The pellet is stopped near the target site to release radiation at the dwell position. Brachytherapy offers precise treatment for few minutes and after a series of treatment, the catheters are removed from the target site and the individual may finally have no radioactive seeds left inside the body.

Brachytherapy is considered the best way of eliminating or destroying cancerous tissues. This treatment has the potential to kill cancer cells and shrink tumors. It involves no external X-ray beams and surgery and has minimal invasiveness. Internal beam radiation therapy allows a higher dose of radiation in a smaller target area. This may not be possible with external beam radiation therapy. It uses a radiation dose source that is usually sealed in a small holder known as an implant. Brachytherapy helps to identify and position the device appropriately to aim at the target site providing an effective treatment for tumor. It takes lesser time than other procedures. The special preparations required before initiating Brachytherapy are: Bowel preparation, blood test, pre-treatment (ultrasound, CT or MRI scan)

The Brachytherapy device market is progressing at a steady pace and is expected to grow at a rapid rate in the emerging economies. According to the estimation of the National Cancer Institute, in the US around 1.6 million new cases of cancer were diagnosed, and 595,690 people died due to cancer in 2016. Cancer is one of the biggest causes of mortality and morbidity in Europe after cardiovascular diseases. The highest cancer rate for men and women together was found in Denmark with 338 people per 100,000, the highest for any EU country. According to ICMR, India is likely to have over 17.3 lakh new cases of cancer and over 8.8 lakh deaths due to the disease by 2020 with breast, lung, and cervical cancers topping the list.

The main products in the Brachytherapy market include:

The Global Brachytherapy Device Market is estimated to witness a CAGR of 6.06% during the forecast period 2018–2024. The market is analyzed based on three segments, namely product type, end-users, and regions.

The regions covered in the report are North America, Europe, Asia Pacific, and Rest of the World (ROW). North America is set to be the leading region for the brachytherapy devices growth followed by the Europe. Asia Pacific and ROW are set to be the emerging regions. The emerging markets have a high potential to grow owing to an increase in the patient population and their focus toward healthcare infrastructure. The brachytherapy devices market has the lowest penetration in the emerging market and most of the vendors are targeting to penetrate countries such as India, China, Thailand, and Vietnam.

APAC is the most focused and has substantial growth due to vast opportunities for vendors to establish their presence. Factors such as growing public awareness, increase in aging population, growing assisted living facilities, presence of large potential customer base, and increased initiatives by government support will boost the market growth. The region is witnessing a rapid growth in the healthcare industry as well. The emerging countries such as India and China are majorly focusing to improve their healthcare infrastructure and the governments have taken initiatives to develop the healthcare facilities in both urban and rural areas. The increased demand for better services among patients and the increased life expectancy in this region are factors that will boost the overall healthcare facility in the region. Also, countries in this region have a strong focus towards the development of healthcare that will include coverage for patients aged 65 and above.

The global brachytherapy devices market is highly fragmented and has immense growth opportunities for vendors, especially in the developing regions. The market enjoys the participation of many global, regional, and local players who are competing fiercely to gain a strong foothold as top vendor. Big players, such Elekta AB, Varian Medical Systems, and C.R. Bard (now BD) often acquire small yet promising companies to increase their market share. Most giant companies are using acquisition strategies to expand their business operations by leveraging their products portfolio across the globe. The competitive environment in the market will intensify further with an increase in product/service extensions, product innovations, and M&A. Strategic alliances are being formed to manufacture and market brachytherapy devices more vigorously and efficiently

The report provides complete details about the usage and adoption rate of brachytherapy devices for the treatment of various cancer. Thus, the key stakeholders can find out all the relevant details about the latest trends, drivers, investments, vertical players’ initiatives, and government initiatives toward the radiation industry in the upcoming years. The report also provides details of the pure play companies entering the market. Moreover, the report highlights the major challenges that are going to impact the market growth. Additionally, it brings forth the key business opportunities to prominent stakeholders to aid them in expanding their businesses and capture the revenue in specific verticals. It also aims to help stakeholders analyze the pros and cons of this market before investing or expanding the business in this arena. 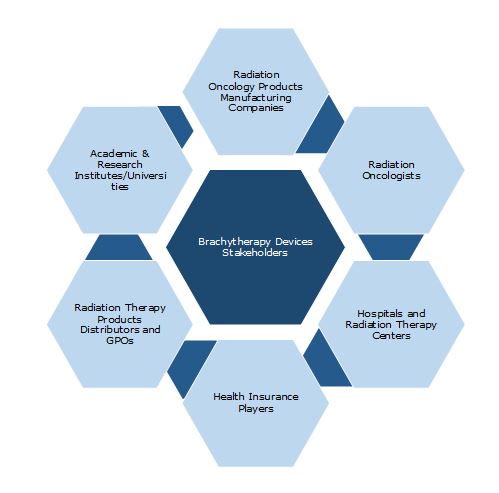 3.5.1.3    Increase in the number of outpatient procedures

3.5.3.1    Shift toward minimal and non-invasive procedures

5.3        Applicators, Afterloaders, and Other Accessories

11   Companies to watch for