The Start-up Bubble: Is it real? 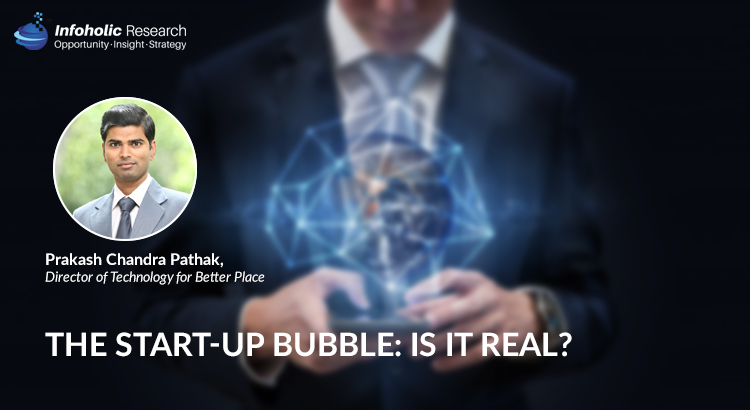 A bubble, in economic terms, refers to a situation when an asset’s price rapidly increases far beyond its intrinsic value due to speculation of the further price increase and then its price falls drastically, thereby causing a huge monetary loss to the investors. The first recorded case of an economic bubble was back in the 16th century when the price of tulip bulbs reached extraordinarily high levels and then collapsed sharply. Tulip was considered a status symbol among the Dutch elite during those days and so the price of tulip bulbs started rising. Many working-class people took out loans and sold their possessions to buy tulip bulbs in the hope of making good money by selling them later. The price rose 100 times within a span of 3 months and then dropped to near-zero levels in the next few weeks. The early investors made good money, however most others who joined in later due to FOMO (Fear of Missing Out) lost huge amounts of money.

Fast forward to 1999 USA. There was mass hysteria among people due to multi-billion-dollar IPOs by new dot com companies. Everyone was rushing to cash in on this new type of industry. Venture capital was flowing into any internet company irrespective of their actual business model or profitability. This resulted in something that we call Dot Com Bubble. In the early 2000s, the US stock market crashed, wiping out billions of dollars in investor wealth. Many people lost their entire life’s savings and many more lost jobs and some, even lives.

Post-2008’s housing bubble, the banking system faced severe pressure due to the loss caused by subprime mortgages and the United States Federal Reserve had to bail out large financial institutions to save the banking system. There was a huge disappointment in public seeing their tax dollars being spent to save banks and this environment gave rise to an alternate currency - cryptocurrency, a decentralized currency without the control of federal banks and government. The most popular cryptocurrency was Bitcoin. The value of bitcoin increased slowly and reached $20,000 by Dec 2017. During this journey, many people invested in Bitcoin and Altcoins (other cryptocurrencies such as Ethereum and Ripple). By 2018, most of the cryptocurrencies lost 70% of their value thereby causing a huge loss for most of the investors.

In case of all the bubbles I have talked about, three things were common - an asset class whose price increased far beyond its intrinsic value, mass hysteria due to fear of missing out and then sudden collapse. In recent times, many start-ups have received huge fundings and have been giving products and services at massive discounts. However, the start-up ecosystem can’t qualify as a bubble due to these fundamental reasons:

Growth is not a linear phenomenon. Whenever man finds something new, we tend to over-rely on it. The markets correct the hype behind new and shiny commodities. Very often this result into a bubble. The Dot com bubble caused huge losses to millions of people, but 20 years later 4 out of the 5 biggest (in market cap) companies are tech companies. Similarly, the cryptocurrency bubble wiped out investments of countless people, however, the future of blockchain (the technology behind cryptocurrency) looks bright.

Start-ups are a relatively new phenomenon right now. However, technological advancements (Internet and Mobility) have reduced the barriers for entry in many industries. We can expect this trend to grow stronger and expect many more start-ups to help solve problems faced by humanity.

Prakash Chandra Pathak is the Director of Technology for Better Place, a series A funded start-up. His team has built the first-ever massively scalable platform to cater to the blue-collar workers of India and currently serves 8 Million people.  Prior to his current role, Prakash worked as a Product Manager for Unisys & Micromax and founded a corporate transportation technology company, OCabbie.