M&A in the Technology Services Industry in India 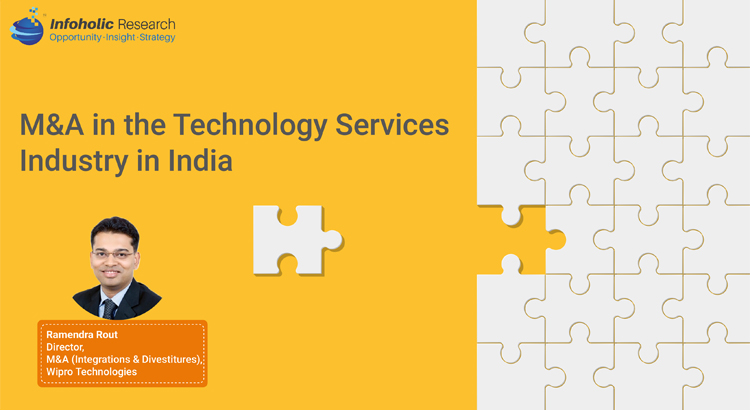 As the market gets perfectly competitive, winning at the legacy application services is directly co-related to cost competitiveness. The first phase of market dynamics in this sector during the early 90s was dominated by a single driver i.e. cost. Most companies focused on building scale and the key differentiator was people supply chain. The probability of win was directly proportional to the vendor’s ability to source skilled resources faster and cheaper than anyone else. Almost every one of the heritage firms as measured by the net headcount addition quarter on quarter and that was the key forward-looking performance indicator that drove investor actions.

As the number of technology interventions like cloud, digital, DevOps began to disrupt the industry, began the next phase of differentiation between these players. The traditional cost arbitrage lever was no more a key differentiator. Clients expected key skills from these players that can supplement the clients’ modernization journey. Hence, they began the focus on building capabilities; some chose to follow the inorganic route while some were comfortable with the organic path.

In terms of the industry focus, 23% of overall transactions were focused on the technology sector, followed by healthcare which was 13.46 % and oil & gas about 9%. Interestingly, of all the US outbound transactions, the second most targeted region was India, comprising of a total of 18 transactions, and Flipkart’s acquisition being the dominant one contributing 16 Bn.

In India, the M&A, outbound transactions for 2018 were at $ 13.4 Bn, a five-fold increase from the previous year, and the biggest pie was for acquisitions focused on the materials sector followed by the technology sector which comprised of deals totalling 2.2 Bn.

The first archetype deals with playing within your core categories and snapping up targets that have a unique brand or solution offering, the second one focuses on geographic expansion, the addition of new customers while the third archetype is about adding completely new offerings, something that the parent hasn’t done earlier.

The other lens is the M&A approach being taken by these firms is whether programmatic or large transaction. Based on research the returns are high when the acquirer follows a programmatic approach to M&A i.e.1 or 2 meaningful acquisitions based on the market cap acquired.

Considering both drivers – M&A approach and M&A archetype it appears that almost all the players have the appetite to build capabilities inorganically and they follow a programmatic approach, TCS being the only exception. The build vs. buy vs. partner analysis clearly tilts towards buying when it comes to adding new capabilities and venturing into newer pastures. While the aggregate numbers by acquisition archetype show that overall the sector has the right strategy by aggressively acquiring newer skills and acquiring companies that will get vertically integrated with its own categories below are some points to ponder upon as the transactions are closed and the value capture phase begins.

M&A in the Indian technology services sector contributes to a very small percentage of the overall transactions happening. However, more than the size and count of transactions what matters is whether each of the transactions has unlocked value that would not have been possible through the organic path and have returned TSR above the median for the industry.

Wipro for the past several years has been a programmatic acquirer focusing on digital, cyber security, cloud and engineering targets in the mid-market sector.  Ramendra in his current role leads all aspects of operational transaction services which includes – synergy planning, go to market strategy, operating model design, day 1 functional integration readiness and change management.