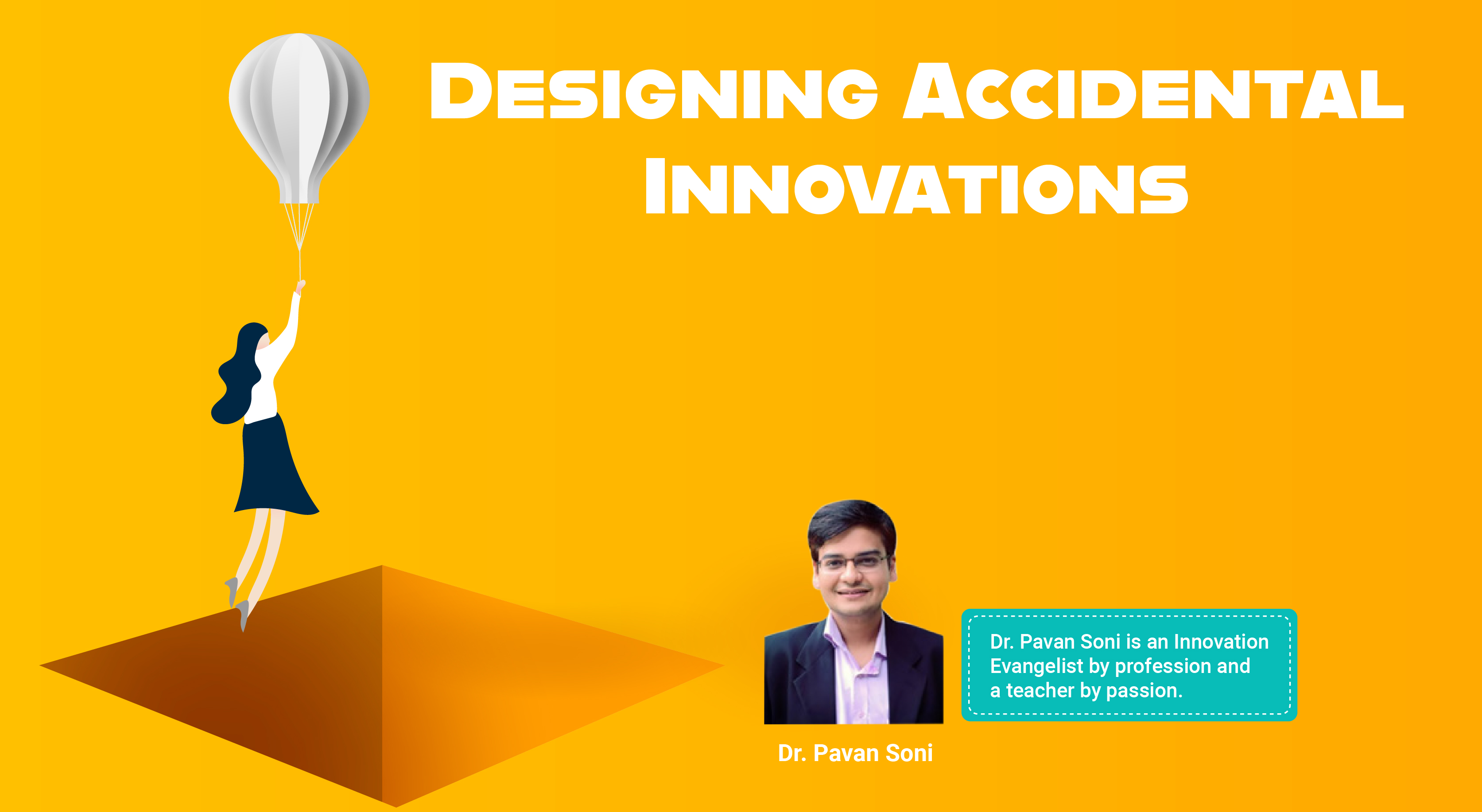 Right from the storied accidental invention of the lifesaving penicillin to the all-pervasive 3M’s Post-it notes, there are several instances of how serendipity smiled and paved way to massive upsides. While accidents have a place in the annals of scientific and non-scientific innovations, what happens after an accident is no accident. It’s meticulous planning, years of ensuing development, and wrapping a compelling business around the apparent failure. The fancier part is the serendipity while execution remains the boring, yet crucial stuff. The real question remains- can serendipity be engineered? Can we design an organisation to profit from more accidental innovations in a non-accidental manner? The answer seems to be an emphatic yes.

The very nature of creativity calls for connecting the familiar in unfamiliar ways. Think of composing music or poem with a finite set of elements albeit through limitless combinations. Some combinations can be planned for but a lot others come up unplanned and that’s where lucky accidents happen. Profiting from such accidents call for two skills- firstly, increasing the rate of such serendipities, and secondly, and more importantly, having an eye of spotting the promising ones and developing those into meaningful outcomes. It not only takes courage, but also enormous amount of discipline to be able to withstand failure and keep up with otherwise pale ideas till they blossom into powerful innovations. In the corporate context, a lot depends on how leaders conduct themselves and promote an environment of planting and profiting from accidental innovations. As for startups, they do it all the time, for there’s isn’t much to lose anyways. It increasingly becomes a challenge with gained size and reputation, and the question is how leaders at seasoned organizations plan for serendipity to push the innovation agenda.

There are five leadership means by which failed innovations can be made a part of a firm’s innovation regime and can be scaled to suitable outcomes. The first three are the hard elements of 1) setting stretched targets; 2) funds for experimentation; and 3) appropriate incentives; while the remaining two are the softer aspects of innovation, viz.: 4) developing experimental mindset; and 5) providing psychological safety.

As for the hard factors, in the absence of stretched targets, there’s not need for one to push the envelop and innovate. One can continue playing safe, and there isn’t any need to experiment, let alone fail. Effective leaders are good at setting stretched targets and rally their teams through the impossible, all the while being in thick of the action. Akio Morita, the co-founder of Sony, brought down the size of Walkman by setting a stretched target that it should fit into a shirt pocket, ditto for the video cassette that can’t be bigger than a paperback book! Ratan Tata did that with the rupees one lakh people’s car, so did Anand Mahindra during the creation of XUV500 that would be the cheetah on the roads. A stretched target sets the tone for experiments, including failed ones.

Next comes the funds to experiment. These are no-question-asked funds, for if you thrust people to seek approval for every penny spent on experimentation, they would rather save the pain. Companies like 3M, HP and Google allow(ed) for employees to have open labs, paid time-off for pet projects, and grants for the very precise reason that they could fail often in order to create something new. Most organisations make it difficult for people to experiment fearing wasted efforts, or, worst still, delinquency. Most sane employees respect liberty and they make it count. As William McKnight of 3M famously quipped, “hire good people and leave them alone”. That’s how innovation happens – given them resources to play with and they shall surprise you.

With the stretched target and resources-to-experiment checked, employees might still drag their feet. If one is getting the salary by the clockwork, why risk? Why risk a failure that might jeopardise a rather spotless career? That’s where incentives come in handy. True to the spirit of capitalism, incentives have the magical power of bringing the best one had to offer, provided the upside it disproportionately high while the downside is taken care of. Call this asymmetric incentive; and smart leaders know how monetary and non-monetary nudges shape behaviours in surprising ways. The key is to encourage experimentation but not reprimanding a failed experiment. Companies like Tata Group has institutionalised an award called ‘Dare to Try’ for felicitating failed innovations that demonstrate exemplary efforts. So has HP with its ‘Medal of Defiance’ given away for past over three decades now for going against the call of duty and succeeding.

Lastly, and arguably most importantly, it’s the psychological safety. The researcher, William Kahn, defines psychological safety as ‘being able to show and employ one's self without fear of negative consequences of self-image, status or career’. For a culture of innovation and experimentation to prevail, the leader must allow for people to have comfort in failing, so much so that failure is not stigmatized, and is seen as a part of learning (which it is). As in parenting, the need to have an environment where the child could learn through the mistakes and grow up to become more self-assured, effective leaders harness the power of planned failure to drive planned success. It calls for strength of character and pulling the right levers of the hard and soft aspects of innovation to be able to encourage instructions from failure, which might be far more enduring than those from success.

The leader, however, needs to caution that failure while attempting something new and audacious should not be confused with poor planning or execution. The very successful Michael Eisner of Disney once noted to this effect that ‘failure is good as long as it doesn’t become a habit’. It’s important to remember that failure must be instructive and must help correct the approach towards attaining success faster and in greater proportions than what a safer approach would yield.

To sum up, planned failure is important for innovation, not only from an outcome perspective but also from a temperament and cultural standpoint. Effective leaders could start by setting stretched goals, enabling funds for experimentation, setting appropriate incentives, cultivating an experimental mindset in the team, and providing high levels of psychological safety in the work environment.

Dr. Pavan Soni is an Innovation Evangelist by profession and a teacher by passion. He is the founder of Inflexion Point, offering programs on Design Thinking, Strategic Acumen, and Consulting Skills. He has been invited to speak at ISRO as a part of their Distinguished Lecture Series and has delivered talks at over 120 organizations in India and abroad.